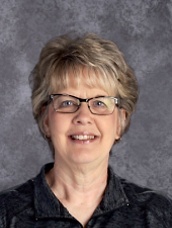 When people think of a school secretary they often imagine someone who answers the phone and collects lunch money, but there is a lot more to it than that. The secretary keeps track of attendance, finds substitute teachers, takes care of activity and lunch deposits, lets people in the school, and does monthly reports. The secretary is basically the backbone of the school.

For 30 years, Lu Ann Sailor has been the school secretary for DeKalb Middle/High School. Day in and day out she has worked in the office assisting the principal, and helping out staff and students. Through the years she has worked with a number of principals and witnessed hundreds of students begin their journey here in the middle school and end it crossing the stage at graduation.

What many may not realize is that Sailor has more than just a 30-year connection to this school. This has not been just a job to her. It has been her life. Sailor was raised in De Kalb. She was a student in the district and graduated from the high school. She raised her own family here, and even after they grew up, she and her husband remained as members of the community. Growing up in DeKalb and raising her children here was one of the best parts of her job. Sailor said she really enjoyed having time with her kids when they were in school.
"Having the same schedule as my kids when they were in school and not living too far from home were the best parts of my job,” Sailor said.
Sailor said that she is going to miss working at the school and the relationships she has built through the years.
"I'm going to miss the people I've met and got to spend time with for the last 30 years the most," Sailor said.

One of those people she has spent quite a bit of time with throughout the years is Superintendent Travis Dittemore. Before moving to the position of superintendent, Dittemore worked as the high school principal. Sailor was his secretary.

“I’ll miss her attitude because to do this job and to come to work every day is tough and it takes a really good attitude to do it,” Dittemore said.

The school will not be the same without Sailor here next year. Counselor Estella Ferguson said that she is going to miss Sailor a lot because not only is Sailor a co-worker to Ferguson but also a friend.
"My friendship with her is what I'll miss the most," Ferguson said.

Sailor shares those same sentiments. While she is sad to leave to leave this behind, she is looking forward to a new journey.

“I’m excited but at the same time it’s sad,” Sailor said. “I’m ready to see my next step in life.”

As for the next step in Sailor’s life, she is already making plans.

“I’m going to spend a lot of time with my family and grandchildren and travel a lot.”